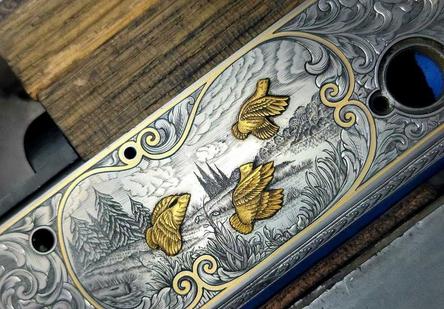 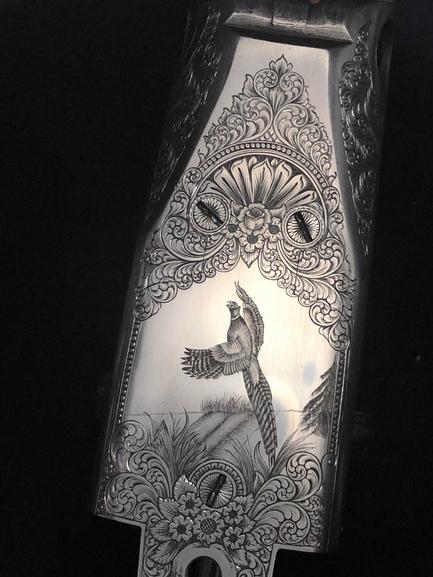 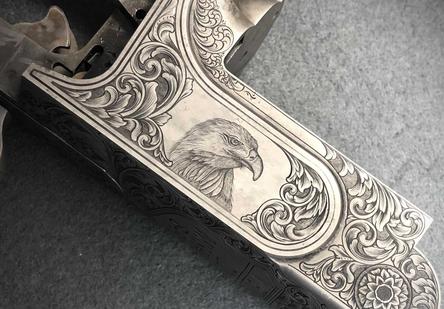 Bertram Edmonston IV is originally from Frederick Maryland, an agricultural community on the edge of the Appalachian Mountians. Immediately after graduating high school, Bert began working in his family's custom retail jewelry store.

During this time period he became a
GIA graduate gemologist.  Seeing the need to learn how to create custom jewelry, Bertram learned traditional and modern techniques for creating jewelry.

It was at this time when he began taking his expertise at fine diamond setting in a different direction.  He attended some engraving classes at the GRS training center  in Kansas and with Mike Dubber in Indiana.

Mike encouraged Bertram to begin trying his skills at a firearm project.  Immediately Bertram enjoyed the larger spaces firearms offered for gold inlays and scroll engraving. Having been influenced by Dubber, Bertram primarily works on Colts and other fine handguns.

In 2014 Bertram decided to make firearms engraving his sole occupation.  His wife's career relocated them to Colorado.  They only lived there for about 2 years, relocating to Tullahoma Tennessee.

Bertram has enjoyed success working with some of the finest gun makers in America, most notably Nighthawk Custom.  In 2019 Bertram had some serious problems with his back, resulting in extensive surgery.

Since then Bertram has worked almost exclusively for private individuals on one of a kind commissioned firearms engravings.  His work is easily recognizable with his use of 24k gold to execute high relief, sculpted, realistic game animals, figures, and special motifs in themed artworks.

In addition to handguns, Bertram enjoys working on shotgun and rifles.  His experience with wingshooting and clay target sports shows in his masterful renditions of waterfowl, upland game birds, and scenes.

His signature American style scroll engraving is a feast of the eye.  His scroll is constantly evolving into more complex structures.  The bold beveling in the outline cuts, fine shading and various background techniques bring it to life.

Bertram is a  member of the following organizations:

The Firearms Engravers Guild of America